A proposed change to the Illinois Constitution would effectively transfer power over taxpayer money to government worker unions. The trend of property tax hikes would likely grow even worse during the next four years.

It’s election season in Illinois, and politicians are running on the promise of property tax relief as usual, including every major candidate for governor.

Illinois’ property taxes are already the second-highest in the nation and a major reason taxpayers are fleeing to lower-tax states. That problem could be made worse on Nov. 8 when voters will be asked to decide the fate of Amendment 1, a tax hike disguised as a “workers rights amendment.”

The change would prevent commonsense reforms to reduce homeowners’ tax burdens while giving government union leaders virtually limitless new ways to demand higher costs from taxpayers. If it passes, Illinois’ trend of large annual property tax increases will likely grow faster than ever. Gov. J.B. Pritzker has failed to deliver on property tax relief during his term – the average family paid $1,913 more during his administration.

Amendment 1 would guarantee that family pays at least $2,149 in higher property tax bills over the next four years, no matter which politicians win this November or how well they try to follow through on their promises.

This is a conservative estimate, assuming the rapid growth of Illinois’ property tax burden holds steady. It’s likely property taxes would grow at an even faster rate, because Amendment 1 would give Illinois government unions unprecedented bargaining powers that don’t exist in any other state. Exactly how much faster is an open question.

Homeowners in Illinois are not destined to see their property taxes rise faster and faster each year. Legislative proposals from Illinois Policy would streamline the cost of local government by consolidating overlapping units of government, cutting back on administrative waste in schools, and reforming pensions to ease budget pressure for cities and towns. Amendment 1 would effectively ban these bipartisan reforms to slow the growth of property taxes.

Already, the $75 billion in pension debt held by local governments is the main driver of Illinois’ rising property tax burden. But Amendment 1 would give government unions more extreme powers to make demands on taxpayers than have existed in any state in U.S. history, meaning property taxes could be significantly higher than $6,444 for the average family by 2026.

Actual and projected annual increases in average Illinois property taxes and rates, 2019 to 2026 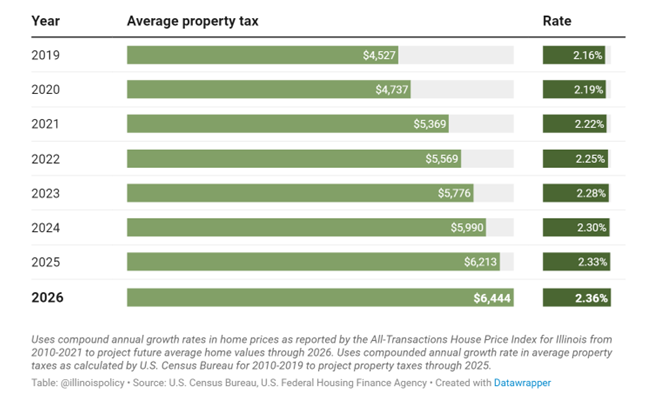 Amendment 1 would grant government unions unprecedented bargaining powers as a “fundamental right,” including the power to override voters and state lawmakers. Proponents are selling it as a constitutional ban on passing right-to-work laws – laws that protect employees’ rights to keep their jobs without having to pay fees to a union. Illinois is not among the 27 states that currently have right-to-work laws, so that aspect has little meaning.

The amendment does include three other provisions that together would severely weaken taxpayers’ voices in state government and make it easier for government union bosses to make unaffordable demands in collective bargaining contracts. First, virtually anyone would have a fundamental right to collective bargaining if they could be considered an employee in any context, including even prisoners. Second, bargaining would be expanded beyond just wages, hours and working conditions to include broad new subjects covering public policy decisions or how to run a businesses. Third, the amendment prevents lawmakers from ever limiting or scaling back on these rights in any way.

Even without these provisions, powerful government unions helped public sector wages grow 60% faster than the private sector in Illinois from 1998 to 2019.

Peer-reviewed research shows stronger government worker unions cause the cost of government to increase, with powerful unions putting even more upward pressure on benefits than on wages. Government worker retirement benefits, which flow mostly to government union workers, have left Illinois local governments with $75 billion in pension debt and are already the primary cause of rising property taxes. Government unions helped Illinois politicians build the state and local pension crisis by supporting both unaffordable benefits as well as irresponsible funding games that pushed costs into the future.

Nationwide data from 2010 to 2019 show a significant statistical association between the percentage of government workers who are members of a government worker union and each state’s average effective property tax rate. 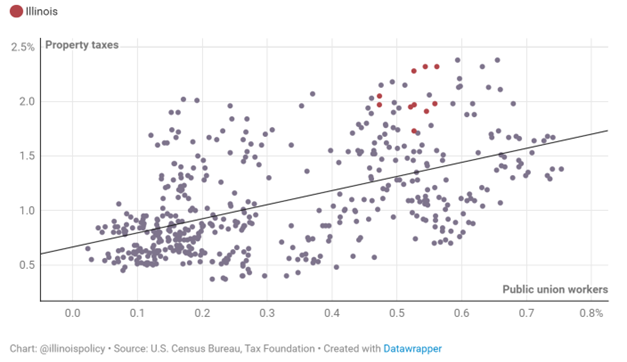 The correlation coefficient is 0.53 with outliers Hawaii and Alaska excluded, and still relatively strong at 0.45 with those states outside the mainland included.

When union power increases, homeowners’ tax bills tend to go up as well.

It also could complicate efforts to fix Illinois’ existing pension crisis, which itself requires a constitutional amendment to undo special privileges granted to government pensions in the 1970 Illinois Constitution. Today, members of state pension systems typically receive more than $2 million in lifetime retirement benefits and cover just 5% of the cost through employee contributions.

Reforms that preserve retirement benefits earned to date but adjust them to reasonable and affordable levels going forward could fix the pension system and protect taxpayers, but not if unions are able to insert these benefits into collective bargaining agreements. State law already says union contracts trump state law when there’s a conflict, so Amendment 1 potentially provides an avenue to making the pension crisis unfixable.

Government unions are already such a powerful force in Illinois politics that it might be hard to see how their influence over taxpayers’ wallets could increase further. But it can get worse.

In recent years the Chicago Teachers Union has refused to teach students unless the union’s  demands were met, including demands over matters of policy that are supposed to be decided by voters’ elected representatives. Amendment 1 would make it easier for unions to take control of these decisions, bypassing legislative bodies, as well as emboldening their existing push for unaffordable wages and benefits.

If Illinoisans are to have any hope of property tax relief, Amendment 1 must be rejected. If it passes, property tax pain in Illinois will likely grow even further beyond acceptable levels.

All credits to IPI. To access full article: https://www.illinoispolicy.org/amendment-1-would-guarantee-2100-property-tax-hike-for-typical-illinois-family/

You can join us using

Created with NationBuilder – Theme by Tectonica